This is an article I wrote after interviewing Maragret Cho, reuploaded as a practise on Github.

Margaret Cho has become known for her dark sense of humour. Now 48, the Drop Dead Diva star has embarked on a tour with what she has described as her "sickest show to date", with it dealing with "a lot of hard stuff about addiction, about weight."

Cho notes she can be "very, very self-destructive" before adding: "I really wanted to make an effort to show how this is like so scary and this is real and this can happen. And so, that’s a big part of the show too."

She cites the late Richard Pryor as an inspiration for helping her to develop this style of comedy: "what is really vital and exciting about comedy is that you can ride that edge of 'this is too much, like, this is wrong' and I learnt all about this from Richard Pryor, who was a great hero of mine. I was able to know him briefly at the end of his life and I’m close with his daughter, Rayne. So, you know, I just love his stuff - he talks about addiction brilliantly and so that’s what I wanted to get into."

The late Joan Rivers has also had an important influence on her career. "Joan Rivers was my friend, my champion, mentor, somebody that I looked up to tremendously," Cho tells me. "I want to embody both of them. Try to be like both of them. That’s my ultimate goal."

The show will feature a lot about Donald Trump; it's "kind of a global apology tour," she explains. She also deals with her runs in with Jennifer Saunders and Tilda Swinton over the casting of non-Asian actors in Asian roles: "I just think it isn’t wrong to have Asian actors in Asian roles. I don’t know how or why that is a controversial thought. There’s so much lee-way white people give themselves in terms of racism. Like, they have such a huge sort of grace period in issues, where they think, “ok racism is acceptable in these contexts." And it’s not. So, you know, it’s important to point it out. I love pointing it out and I love revelling in it and being nasty about being right. So it’s petty, it’s funny, and I love it."

Cho, whose tour comes to Britain in late November, is looking forward to spending time in Britain: "I always do and this time I get to go to places like Sheffield and Birmingham and places I haven’t been, I love it. I’m really excited about that, to go to new places and also go back to London and Edinburgh."

Her previous tour featured dog rescuing, where before the show the audience could see dogs that they could apply to adopt. This feature won't return, however, as Cho explains it was "hard to get together but it was very successful." She did, however, note the experience was "really cute" and it was "really nice to have that" as part of the show.

Cho will also return to the silver screen with Highland, which has just been picked up by TNT. "It’s a show about the big marijuana boom in California, which is what we’re experiencing right now, this green rush. And this family, this Korean family, that gets very very wealthy, very quickly. And it’s really what’s happening right now, so they’re like the Karhashians."

"I play a recovering drug addict, who has to work in the middle of this and not get high. It’s like a minefield, so I’m loving it. It’s really cool."

In 1994, starring in All American Girl had proved difficult for Cho, who starved herself for weeks after being told to lose weight, causing kidney failure. She was also told at points she was too Asian. However, she notes there have been massive changes in TV since: "We’ve had a real shift since then in the way we look at race in entertainment. Back then, we had a very different system of television; we had four networks and there was no real cable as there is now, so it was very different. If you were on TV the visibility was so high, and there was this attitude we have to alter to conform to the same body type and same look and I was so different in every way. So, I had a lot of problems there."

Cho has persevered and has been named by Rolling Stone as one of 50 best comedians of all time. Fellow actor John Cho (Harold and Kumar) has described his namesake as his "hero." She is clearly delighted at this recognition: "It’s really amazing. And I love John, he’s like my kid. They’re so many things that have happened that I’m amazed about, the thrills and the Rolling Stone thing is so awesome and really exciting and I am in great company there. There with all my friends, so I love that, and I love John, so that’s really cool."

One of the most common features of these acclaimed shows is her high accented impression of her mother, which Cho insists her mother loves, telling me: "You know, I believe that when women age in general, they become invisible. But with my mother, it’s the opposite; she’s become more present in everything that I do." 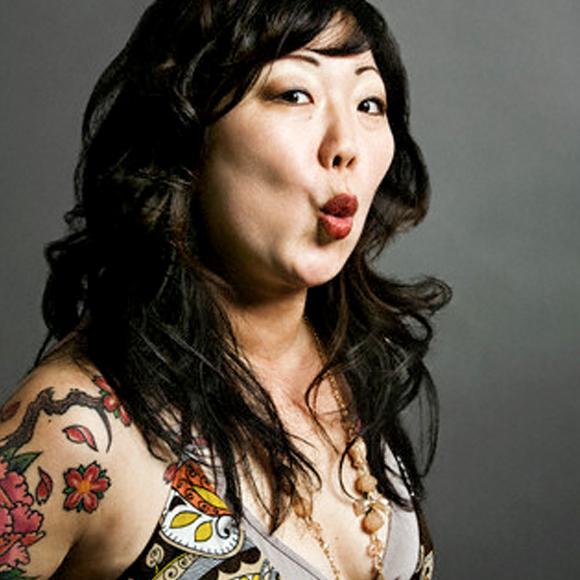 It is clear she likes to push the limit, but what if she goes too far?

She believes writing comedy has also helped her deal with traumatic experiences in her life: "I think it makes it liveable. You’re able to look back and laugh about things. I think it helps and it’s a good therapeutic tool. Comedy is ultimately always about coping. So I’m glad for that."

This has been the success of a life long dream. "I’ve been doing it since I was 14. I always wanted to be like Joan Rivers. I saw her when I was a really young kid and I immediately decided that this was going to be my life. I knew that this was right, I knew that this was what I was supposed to do. It just became very clear to me that this is my profession.

"I love it and I’m so grateful to be able to have such a long career, and I hope that I can continue. All I want in life is to stay and be a comedian. This is what it’s been like and what it’s going to be like, forever."

She tells me she sometimes stops and asks "what the hell, what? where am I?" Her rise has been "like Cinderella and everything is like the ball" but she says she still likes "to take invitations and go and do stuff" to give "service to the child in me."

In addition to her work in entertainment, Cho is known for her political activism, in particular, anti-racism and pro-LGBT rights work. I spoke to her before the weekend's riots in Charlottesville, but we discussed protest and whether progress is being made in these areas.

"I think that it’s happening - progress is inevitable, it’s got to happen, and it’s what we need, I think that’s one of the good things about what’s happening right now. With Trump, there’s this huge groundswell of protest, a lot of activism. I just participated in the Resist March, which was a big thing in Los Angeles.

"We’ve got to focus on the protest and the positivity, you know, that’s what’s really needed right now."

Cho admitted, "there are all sorts of limits to protest, [but] there’s also no limits to peaceful protest." She describes peaceful, nonviolent protest as "the ideal" before adding: "I have been involved in situations where there has been rioting and being out there, where there’s riot police, looting, and that kind of incredibly scary violence, that really has no place in political protest.

"Although it’s something that’s very shocking to see, and very exciting in a way, but terrifying too, you don’t want to get tear gassed, or have bean bags thrown at you, or even real bullets. That’s also a part of that experience, so that’s what happened right after Trump was elected. I was in Portland, Oregon, and for four days there were incredible riots and it was roaming gangs of people who were in masks and ready to fight. Yes, there was nothing to fight against exactly, just this idea of Trump being president. So, you know, it was interesting to see, but I don’t think it was helpful to what this goal of peace is."

She notes though maybe with Trump, who "doesn't care," that might change before adding: "But I wouldn’t want to be an entertainer in office with no clue of what’s going on and that’s not the answer either, so I would love to but I know that it would require a lot more integrity than I have!"

Cho's tour will last a while but she's already thought far ahead into the future: "I’ll work on Highland, I’ll be doing TV stuff, I’m still working on Joan River’s show, The Fashion Police. I always want to do comedy. I’ll be touring for this show for quite a while, and I still need to go to Asia and Australia, all of that side of the world, so there’s still a lot to do."

Margaret Cho's UK and Ireland tour dates are from the 25th November to the 10th December. For full dates and prices, visit here